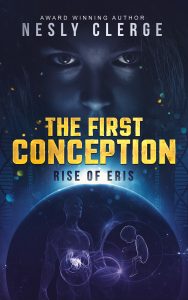 The author of the addictive Amazon #1 bestselling psychological thriller The Anatomy of Cheating shows his narrative range in his latest outing, The First Conception: The Rise of Eris. In an alternate reality, a genetically engineered blight has caused most of humanity to become infertile. As in vitro techniques fail, the human race faces inevitable extinction.

The fear of mass infertility has been a common sci-fi theme over the past few decades, including P. D. James’ novel The Children of Men, Margaret Atwoods’ The Handmaid’s Tale and the upcoming The Completionist by Siobhan Adcock. With The First Conception, author Nesly Clerge has written a worthy entry into the canon. But unlike Atwood, James or Adcock, the cause of infertility isn’t caused by an environmental disaster, but rather, by a powerful team of women who have had enough of male dominance and sexual abuse.

The book focuses on traumatized molecular biologist Dr. Katherine Eris Barnes, the child of a poor single mother with a dizzying array of abusive lovers. Clerge’s depiction of Barnes’ home life is remarkable for its psychological and physical brutality, but the result is a smart, imaginative revenge fantasy wrapped in a terrifying medical thriller. While Barnes cops to her plot to destroy humanity in the very first chapter, discovering how she does it – and why – is well worth the journey.

Book clubs will surely argue over whether her actions are fully justified, but there’s no denying the timing of this book in the social zeitgeist. If The First Conception had been written by a woman, some would surely call it the ultimate #metoo thriller. But in Clerge’s capable hands, it’s still an excellent start to a promising trilogy. Bravo.