The Bottom Line: If you love big, never-saw-it-coming endings, this wintertime gem is for you. 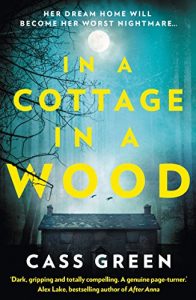 With the audiobook version weighing in at a brisk eight hours (compare that to The Goldfinch’s 32 hours), the payoff rests on a carefully-crafted crescendo, starting when a woman, Neve, meets troubled Isabelle on Waterloo Bridge late one night. Isabelle forces a parcel into Neve’s hands and jumps to her death in the icy Thames below.

Two weeks later, as Neve’s wreck of a life in London collapses, an unexpected lifeline falls into her lap – a charming cottage in Cornwall left to her by Isabelle, the woman on the bridge. The solution to all her problems.

But when Neve arrives, alone in the dark woods late one night, she finds a sinister-looking bungalow with bars across its windows. And her dream home quickly becomes her worst nightmare – a house hiding a twisted secret that will change her life forever…

One of Us, an Essential YA Whodunnit by Karen M. McManus
The Night Trade, a new Livia Lone Thriller by Barry Eisler