The Bottom Line: One of the most exciting mystery novels in years.

Jarringly gritty and grounded, Nobody’s Safe Here is a fresh take on what seem like tried-and-true situations. Unexpected plot twists and variations on procedurals will have readers excited to turn the page. 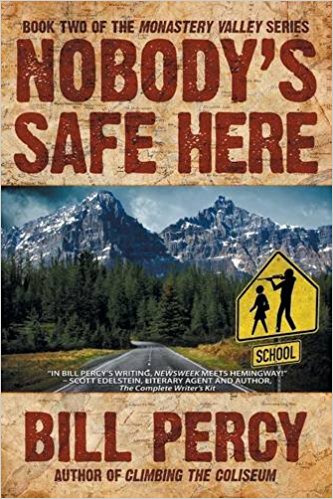 What starts off as a heavy-handed and brutal book — there’s a planned school massacre, possible demonic possession, a mental breakdown, and a new deputy sheriff from the “big city” — becomes one of the most exciting mystery novels in years. Where so many stories begin with the arrival of a strange sheriff, author Bill Percy turns that formula on its ear and offers up a slew of imaginative and surprising spins along the way. Nobody’s Safe Here is filled with a colorful cast that’s both intriguing and off-putting. Deputies Andi Pelton and Brad Ordrew connect a seemingly disparate crew: an all-star high school student, a cattle baron, and a psychologist. Among these characters, there’s a romance, a heartbreaking plot, and good people facing hard choices. In what’s supposed to be a quiet, tiny enclave, there are major problems everywhere. The plot can seem overwhelming at times, but the author manages to keep everyone in their lanes, bringing them together only when necessary — and sometimes in very surprising ways.

As readers get deeper and deeper into the minds of each character, Nobody’s Safe Here reveals itself as a psychological mystery as much as investigation into what drives people to do what they do. The dialogue is believable and a joy to read, the unusual mix of topics is relevant in the current state of America, and Bill’s colorful descriptions makes this remote city seem huge and vast. Anyone looking for a mystery novel that’s unlike anything on their bookshelves (digital or otherwise) needs to pick this one up.