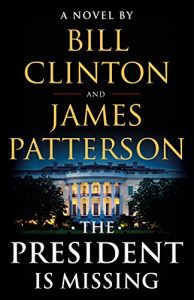 On a recent Stephen Colbert show appearance, Stephen King mused that James Patterson spends approximately 12 hours working on each book. True, Patterson has become notoriously prolific in recent years as more than 100 books a year are churned out in his name (Patterson still does the outlines).

Nobody’s saying how much time Patterson put into his collaboration with Bill Clinton, but the result is an astonishingly good piece of fiction.

Rogue U.S. President Jonathon Duncan faces impeachment for persistently escaping from the eyes of the Secret Service. Duncan is convinced that he is the only man with the insider information to stop an imminent cyberterror attack on the U.S.

To say much more would spoil the fun.

Set over the course of three days, The President Is Missing sheds a stunning light upon the inner workings and vulnerabilities of our nation. Is it filled with information that only a former Commander-in-Chief could know?

You be the judge. One thing is for sure: this is one thriller that is well worth reading.