The Bottom Line: A first-class conspiracy thriller with the highest possible stakes. Fans of Brad Meltzer and Mark Greaney will fall hard for Kevin Land Patrick. 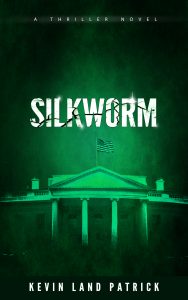 SILKWORM finds America still recovering from debilitating attacks on its water and electricity infrastructure, which resulted in thousands of deaths and a lingering radioactive zone in the southwest. Nearly two years later, CIA operative Elle Hardwick continues to pursue a group known as the Twelvers. The group, believed to have been led by a global syndicate of twelve wealthy industrialists, hardly fits the standard profile of a terrorist organization.

According to Hardwick’s theory, the group had been in existence for at least 70 years. Before its most recent attack, the group is thought to have caused attacks against US ships in the Persian Gulf during 1987 in the Iraq-Iran war, two stock market crashes and innumerable other world events. Four of the 12 members were dead thanks to a CIA operation, and among the survivors are an unknown American, a Russian and a Swiss national. With eight members in total still on the loose, a new array of threats are in the group’s crosshairs, including the nation’s capital.

As protagonists go, Hardwick is serviceable enough, but the book’s first chapters, which pre-date Hardwick by decades, prove that Patrick himself is the real star of the book. A prominent water attorney and infrastructure expert, Patrick possesses an uncanny ability to reimagine historical events through an extremely sophisticated framework that includes hair-raising geopolitics, arms dealers and economics. Between keen observations about greed and power, high-octane action and intellectual chess are served in equal measure. The result is a well-told thriller about a war over resources and power that, thankfully, is never sullied by post-911 religious fanaticism. Highly recommended for fans of Mark Greaney and Brad Meltzer.