The Bottom Line: Solving Cadence Moore is the quintessential mystery for the podcast era. Highly recommended. 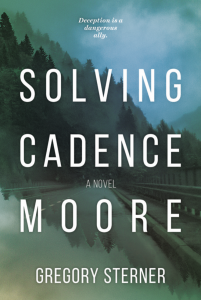 In the age of hit true crime podcasts like Serial, Criminal and My Favorite Murder, debut novelist Gregory Sterner has delivered the first work of fiction to effectively capture the contemporary media zeitgeist. Prepare to be hooked on page one, and stay tuned for the jaw-dropping final chapter.

Radio personality Charlie Marx is already the host of a popular radio show focusing on conspiracy theories. But behind the scenes, Charlie longs to host a podcast. Unfortunately, the UPR network has a history of producing underwhelming podcasts, and was reticent about launching new ones. Charlie’s boss, Tyler, has gone to bat for him, pitching a breakout hit they had been waiting for: the podcast series would be devoted to the disappearance of Cadence Moore, a young musician on the brink of mainstream American mega-stardom.

Both men realize that the odds that they will actually solve Moore’s disappearance are minuscule. But to get Tyler’s backing, Charlie has to do the one thing he hates: lie to his audience. And so, in the first episode, he promises the impossible – that he will actually reveal what happened to Cadence Moore.

Sterner’s portrayal of the Moore investigation itself is deserving of a self-contained prequel, but the novel’s real tension comes as Charlie, who is in every way an amateur sleuth, races against the clock to unravel a murder mystery that is deliciously complex. Facing a live audience for the finale, will he be revealed as a hero, or as a fraud?

What’s more, Sterner has effectively projected the terrifying anxiety at the heart of every investigative journalist: what if we learn nothing? Highly recommended.

To Hell with Johnny Manic, One of the Year’s Best Thrillers
The Night Window, a Spectacular New Technothriller by Dean Koontz