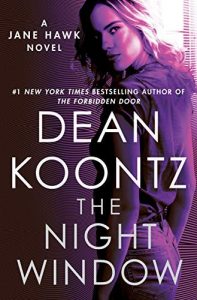 Are you prone to conspiracy theories? Do you fear technology? If so, you may want to skip Dean Koontz’s latest outing, which demonstrates both his passion for emerging technology and his ability to project oddly believable worst-case scenarios onto it.

A group of lecherous evil-doers called the Techno Arcadians have been using the latest tech to turn people into robots and sex slaves. Disgraced ex-FBI agent Jane Hawk, Koontz’s best character ever, stands in their way.

To be on the safe side, Jane stashes her son, Travis, in Arizona. As you might guess, the move doesn’t guarantee his safety. To go after the Techno Arcadians, Jane teams up with retired FBI agent Vikram Rangnekar, who’s a brilliant hacker. Prepare for lots of cyberspeak and some great banter in general.

Meanwhile, there’s a filmmaker hunted for sport in Colorado by an immoral billionaire, and lots of personal grievances and vendettas to be settled among all the primary characters. There’s a lot going in on the Night Window, but the book remains a fast-paced read nevertheless.

Jane’s interplay with Vikram is just plain fun, and readers will get a kick out of all the devices Koontz dreams up. In general, most “technothrillers” shouldn’t be called that, because every work of contemporary fiction features a lot of technology. In this case, however, the title is apt.

Audiobook fans will appreciate Elisabeth Rodgers’ narration, which provides some sparkle without going too overboard with character voices.