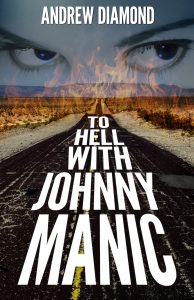 Tom Gantry, a.k.a. Johnny Manis, a.k.a. Johnny Manic, is having an identity crisis of epidemic proportions. As Tom tells it, the gregarious, effortlessly cool Johnny Manis became legendary in the tech world for making a fortune off mobile video games, publishing a manifesto, then deleting his social media accounts and going off the grid. He has a spotless criminal record, or so he tells himself. Meanwhile, alter ego Tom is a fugitive embezzler with a gambling problem who is in violation of his parole.

As the novel begins, Tom is in a Vegas casino, and is on a losing streak. Afraid that his addiction to roulette and craps will leave him broke, he wires $240,000 to his ailing father’s healthcare provider, leaving just $10,000 for his own survival. Eager to get out of town, and yet equally motivated to “kill John Manis once and for all,” Tom meets a computer technician from Napa and, following a crazy impulse, offers to purchase the man’s struggling business.

Tom may be mixed up about who he is, but grifting his in his blood. When he spots Marilyn Dupree in a grocery store, his killer instinct takes over. Marilyn is the wealthy wife of a philandering software tycoon. Having consciously or unconsciously found his mark, Tom begins a precarious journey that catches the attention of local Detective Lou Eisenfall. As Tom works his magic while balancing his identity, the ensuing cat-and-mouse game is one for the ages.

Andrew Diamond, author of the critically acclaimed Gate 76, has created a truly riveting tale of deception, murder and psychological suspense. Part psychological thriller, part noir, Diamond has accomplished the incredibly difficult task of deriving true suspense from the battle for supremacy going on within Tom’s own mind. As Diamond unfurls this highly entertaining caper, readers will take great pleasure in spotting the lies Tom tells himself – and us.