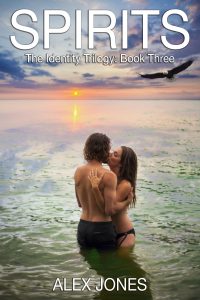 When FBI agents arrive at the lavish Las Vegas home of psychologist Dan Whitney, they find local police and CSI technicians responding to an alleged abduction of Dan’s girlfriend, Francesca Capellini, during a housewarming party. It takes only a few moments for law enforcement to connect the dots: “Weren’t you the two who were involved in that kinky shooting a few months ago in Palm Desert?”

The trilogy’s physical landscape is greatly expanded in this final installment, with nearby Nellis Air Force Base serving as a pivotal location and symbol. It’s no spoiler to say that military misconduct is a major plot trigger, through which Jones drives a busload of white-knuckled scenes. Monster villain Soren Kristiansen, the product of unimaginably abusive foster homes, is also back to create more mayhem. The recent wave of real-life sexual allegations rocking news headlines over the past several months give additional meaning to every character and page.

With that said, Spirits isn’t the ideal entry point for any newcomer to Jones’ world. Start with the razor-sharp thriller Walls, or the prequel, Angela’s Eyes.