What if you found a way to send something back in time? But not millions of years back, to the age of the dinosaur. Not even a minute back. What if you could only send something back a fraction of a second? Would this be of any use? You wouldn’t have nearly enough time to right a wrong, change an event, or win a lottery. 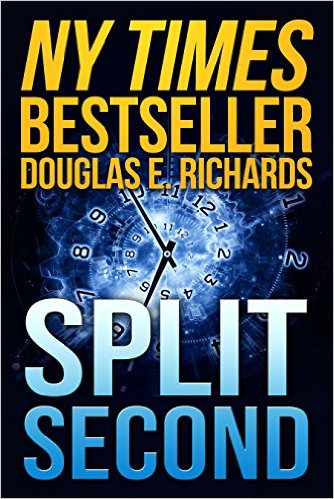 Nathan Wexler is a brilliant physicist who thinks he’s found a way to send matter a split second back into the past. But before he can even confirm his findings, he and his wife-to-be, Jenna Morrison, find themselves in a battle for their very lives. Because while time travel to an instant earlier seems useless, Jenna comes to learn that no capability in history has ever been more profound or far-reaching.

Now, as Jenna fights to defeat the powerful forces arrayed against her, nothing less than the fate of humanity hangs in the balance. . .

Containing a stunningly unique slant on time travel, SPLIT SECOND is a roller-coaster ride of a thriller, one that will have readers pondering the nature of time, and of reality, long after they’ve read the last page.

Book Review: The Apothecary, a Nano-Technology Thriller by Marshall Chamberlain
Book Review: When the Tiger Kills, a Police Procedural by Vanessa Prelatte