The Bottom Line: This grim mystery about guilt, loss and the dark allure of vigilante justice is unlike anything you’ve read this year. 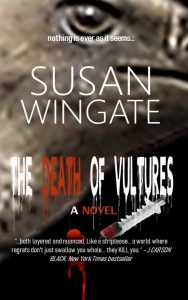 Set on an island in the rural Pacific Northwest, Susan Wingate’s The Death of Vultures tells the story of a heartbroken middle-aged woman, Meg Storm, and her struggle to come to grips with the deaths of her husband and daughter. Both died in apparent suicides. Or did they? The question of what or who is the cause of death is pursued doggedly throughout.

The Death of Vultures includes the investigators, guns, dark skies and cemetery scenes you’d expect in any mystery, but Wingate’s opus is anything but a straightforward procedural. In one of the book’s most telling moments, Meg’s pastor attempts to help her come to grips with the idea that her daughter took her own life. She can’t, preferring instead to blame her drug dealers: “That’s who’s going to pay.”

The Death of Vultures isn’t for the casual mystery fan. The book is told in the first, second AND the third person. Adding to the complexity, the story unfolds in a series of flashbacks and flash-forwards from multiple points of view. However, Wingate’s intentional disorientation serves the narrative well, channeling the spiritual angst and despair that seethes from every page more effectively than words ever could.

Ranging from the book’s dense prose to its format, Wingate demands readers’ close attention from the very first sentence to the last. But does it pay off? Absolutely. Prepare to be haunted long after turning the final page.