The Bottom Line: A stellar romantic suspense novel that may launch author Sandra Brown into superstardom. 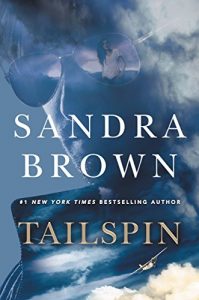 Author Sandra Brown has published more than 60 bestsellers since the 1980s, but until now, she still hasn’t had the kind of breakout hit that made her a household name. That may change with Tailspin, a thriller about a freight pilot that always gets his cargo where it needs to be on time.

But when Rye is asked to fly into a completely fogbound northern Georgia town and deliver a mysterious black box to a Dr. Lambert, he doesn’t ask questions.

As Rye’s plane nears the isolated landing strip, more trouble than inclement weather awaits him. He is greeted first by a sabotage attempt on his plane that causes him to crash land, and then by Dr. Brynn O’Neal, who claims she was sent for the box in Dr. Lambert’s stead. Despite Rye’s “no-involvement” policy when it comes to other people’s problems, he finds himself irresistibly drawn to the intrigue surrounding his cargo . . . and to the mysterious and alluring Brynn.

Soon Rye and Brynn are in a treacherous forty-eight-hour race to deliver the box before time runs out. With everyone from law enforcement officials to hired thugs hot on their heels, they must learn to trust each other so they can protect their valuable cargo from those who would kill for it.

When it comes to relationships, Brown always delivers the goods, but she takes her time fleshing out these characters in the opening chapters, and the result is a big payoff.