The Bottom Line: A vivid, full-throttle military thriller featuring a villain that readers will never forget. 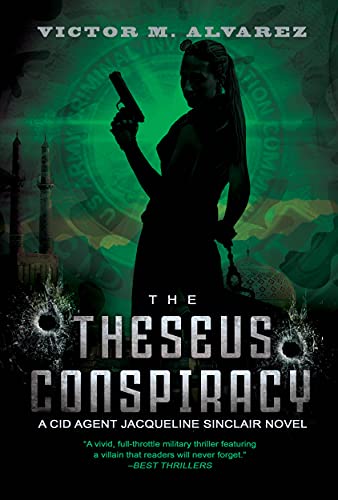 In the eagerly awaited follow up to Victor Alvarez’ first Jacqueline Sinclair thriller, Requiem for the Dead, the Army’s counterterrorism ace is again tasked with stopping a potential global catastrophe.

As the book opens, an American SEAL team is preparing to infiltrate the Russian Federal Prison at Murmansk and extract a double agent codenamed Theseus. The scene, which involves a stealth attack sub in mine-infested waters, is as breathtaking as any opening scene in the genre. Even if they can get Theseus, holding him in their safehouse in Stuttgart, Germany, will be a challenge.

Sinclair’s entrance comes in a scene of blood-soaked violence that feels decidedly personal. When her best friend is executed, her father, Colonel Richard Sinclair, comes to her aid. But is anyone close to his daughter really safe?

With Theseus, Alvarez has created one one of the more memorable villains in contemporary espionage literature. An American by birth, he was recruited by the CIA straight out of his college ROTC program. Trained and given plastic surgery, he was reborn as a high-value Russian spy named Anisi Sverchinsky. Operatives within Russian plan to have him pose as an FSB agent to steal seven nuclear suitcase bombs in an attempted military coup.

Can Sinclair and her partners stop him?

The novel is filled with one breathless action scene after another. Alvarez doesn’t load down the narrative with backstory, and yet the novel works well as a standalone for newcomers. More than that, the machinations of the book’s plot are highly imaginative, ending in a stunning resolution that will leave readers salivating for the next series installment.