The Bottom Line: A delicious helping of contemporary noir from an exciting newcomer to the genre. Fans of hardboiled crime fiction legends Dennis Lehane, Jo Nesbo and Raymond Chandler will love The Thin Blue Sliver. 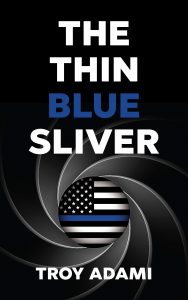 Troy Adami’s crime novel opens in a Fort Lauderdale bar circa 2005, as former Miami-Dade Police Department homicide detective John Moss takes up his usual place at the bar. An old flame, Lucy Ventrone-Kemp –– and wife of a prizefighter about to contend for a world title – comes to see him. She’s moving to California, and her mood is reflective, bittersweet and openly flirtatious.

Through an informant that walks into Moss’ life out of the blue, he soon learns that Lucy and her husband are in deep with the Vandoris, a family of legendary Italian mobsters. Moss knows them well, having brought down their operation in Miami. It seems that Tito Vandori’s plan is to lure Moss to California. But why would Tito want to exact revenge in California? Is Lucy involved in the plot?

First-time crime novelist Adami’s narrative is straightforward and just about flawless. In Moss, Adami gives us a believable ex-cop whose life is in a downward spiral, and in Lucy, a compelling femme fatale who may or may not really want Moss’ help. And while Moss’ assertion that boxing is “a dead sport” was far more true in 2005 than today, Adami’s use of the sweet science as a plot device here feels both vintage and modern.

There’s zero fat in The Thin Blue Sliver – no unnecessary backstory, complex timelines or out-of-left field story triggers. Adami uses the margins to effectively flesh out his locales, including the ugliness of downtown LA prior to its revitalization project in the 2010s. Only Adami’s use of the present tense sets this apart from classic noir. Highly recommended.