Brad Thor’s hero, Scot Harvath, just can’t catch a break. Just back from a mission to Somalia that has left him physically and emotionally spent, he’s saddled with another high-stakes mission (from the publisher): 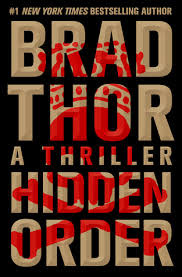 The most secretive organization in America operates without any accountability to the American people. Hiding in the shadows, pretending to be part of the United States government, its power is beyond measure. Control of this organization has just been lost and the future of the nation thrust into peril.When the five candidates being considered to head this mysterious agency suddenly go missing, covert counterterrorism operative Scot Harvath is summoned to Washington and set loose on the most dangerous chase ever to play out on American soil. But as the candidates begin turning up murdered, the chase becomes an all-too-public spectacle, with every indicator suggesting that the plot has its roots in a shadowy American cabal founded in the 1700s. With the United States on the verge of collapse, Harvath must untangle a web of conspiracy centuries in the making and head off the greatest threat America has ever seen.

If you haven’t yet read Brad Thor, beware that many of his readers are drawn to him because his plots embody not just a conservative viewpoint, but also one that is highly conspiratorial and suspicious of anything coming from “the left.” Scan many of his reader reviews on Amazon, and you’ll notice that a lot of people agreeing with the information and points of view in the books. Yikes. Folks, if you’re looking for information, read The Economist, not fiction.

However, Thor’s politics should not deter you from enjoying Hidden Order. The fantasy unfolded here (it involves “The Fed” but we’ll divulge no other details at this time) is gripping and well told. It’s an interesting take on the secret society subgenre of Thrillers, and one that could make a future top 10 list here on Best Thrillers.