The Bottom Line: A spellbinding crime thriller bolstered by a razor-sharp audiobook performance. Perfect for Michael Connelly fans looking for another dose of LA noir. 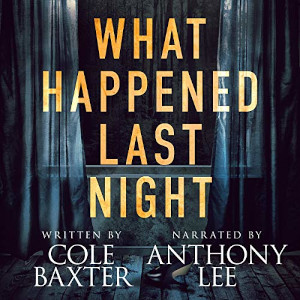 In this twisty whodunnit, LAPD detective Jamie Del Rey investigates the death of 19-year-old Candy Xavier. Her body was found on the lawn of a Hollywood Hills home belonging to William and Carlotta Alden. Judging by an apparent knife wound, she may have been dead before the fall.

Cole Baxter’s novel is told with a steady cadence of alternating points of view, beginning with Jamie, then Carlotta, then William. It’s clear from the get go that William is a serial philanderer who works as an architect when he’s not sleeping with younger women. Carlotta is a bitter but somewhat dutiful wife, and in the audiobook version, narrator Anthony Lee effectively spits venom-laden narration as Carlotta casts any female within proximity of her husband as a “gold-digging little whore.”

Did one of the Aldens kill Candy, or was it one of William’s other love interests?

Both William and Carlotta are raging drunks, which makes the chapters told from their point of view tantalizingly unreliable. In contrast, each section from Jamie’s purview is a breath of fresh air. He’s a rock solid crime solver in a city filled with chaos. It’s a pleasure to ride along with him as he slowly increases the pressure on the Aldens. At one point, he gets up in William’s grill even as he’s recovering from a car accident. The tension rises off the page, and Lee deftly switches tone between the two characters as their mutual frustration grows.

Baxter’s setup is simple, but with the glitz and grime of LA as a backdrop, What Happened Last Night builds into an effective mystery that has more than a few surprises up its sleeve. Highly recommended, with the Audible version is a particularly good listen.