The Bottom Line: A groundbreaking, nail-biting and wondrous legal thriller. 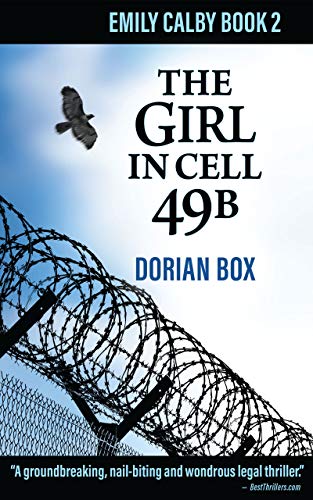 In Dorian Box’s The Hiding Girl, 12-year-old Emily Calby survived a home invasion and became an unlikely vigilante. The Girl in Cell 49B finds Emily on her 16th birthday. She’s on a bus in the Ozarks where she has been living for the past three years with her mentor, ex-gang member Lucas Jackson.

Her birthday present from Lucas? A 9mm handgun. Her freedom ends when she pulls the gun on an abusive biker at a gas station.

Emily finds herself in a hellish juvenile detention center facing charges for felony assault and illegal gun possession. With both parents dead, and Lucas her illegal guardian, she is essentially alone. But when fingerprints reveal her true identity, her crimes in Arkansas are the least of her worries. She is extradited to Louisiana to face murder charges.

To Emily’s surprise, the prosecution is able to present significant surveillance footage that doesn’t bode well for her case. Box pairs her with public defender Paula Dunwoody, who is perpetually hamstrung by poor health and a lack of resources. As Emily endures one disappointment after another, she comes to grips with the stark reality that she will have to save herself.

She arranges to be assigned to work in the prison library. She makes just eighteen cents an hour, but in the process she finds a law library, where she begins arming herself with knowledge that will soon become essential.

Throughout the novel, and especially in the most climactic courtroom scenes, Box manages to straddle the line between dark intensity and humor in this most unusual legal thriller. Emily’s wry humor is ever present, but even in its most audacious moments, The Girl in Cell 49B is always believable.

Along the way, numerous storylines regarding Emily’s relationships with those inside and outside the prison are essential to her character arc. But Emily’s plight to use the law to defend herself is what makes the novel both rare and truly memorable.