The Bottom Line: The Man in the High Castle meets The Circle. A truly innovative sci-fi thriller that should make for lively book club discussion. 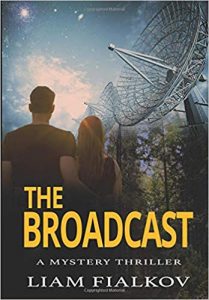 What if a technological breakthrough could allow people to view video footage of historical events going back thousands of years?

That is the promise of a fascinating technology at the center of The Broadcast, a novel about a television network called TXB that produces believable footage of contemporary events, as well as historically significant ones, such as the Battle of Gettysburg, without so much as a set, a production crew, actors or animators. The footage appears to be, for lack of a better term, authentic. Is it real, or some kind of hoax?

Meanwhile, TXB fan Sarah, a psychologist who lives with her husband in a small central California town directly on the San Andreas Fault, is perpetually haunted by the forced adoption of her newborn son when she was just sixteen. While she and her husband appear to build a life together – complete with three dogs, eleven cats, the chickens, ducks, and geese – it’s really a house of cards on the verge of collapse. The circumstances surrounding her pregnancy and the mystery over her son’s whereabouts have left a void in her life that proves impossible to satiate, leading to increasingly provocative behavior that threatens to turn her life upside down. Author Liam Fialkov takes his time building Sarah’s character arc, and the payoff is worth the wait.

In terms of sheer real estate, one could argue that this is Sarah’s story, but the concept itself is truly the star. When religious groups become concerned about whether TXB can reach back 2000 years, and what future episodes might reveal, Liam Fialkov’s fascinating concept becomes a bonafide page-turner. Like Dave Eggers’ The Circle, The Broadcast also evokes important questions about society’s relationship to media, surveillance and personal privacy.