The Bottom Line: A haunting psychological thriller that will stick with you long past the final chapter. 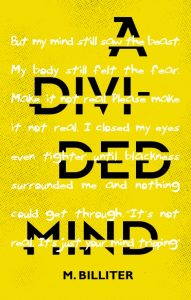 Wyoming high school senior Branson Kovac hears voices. Sometimes, he sees entities that he calls “the shadow people” carry out violent acts. And sometimes, they kill people. Including his mother.

Told in alternating points of view, A Divided Mind is the terrifying story of what happens when a teenage boy begins showing signs of schizophrenia. Branson is the ultimate unreliable narrator as he attempts to distinguish reality versus hallucinations. In the most harrowing chapters, he engages in dialogue with an imaginary friend who seems capable of manipulating him into doing just about anything.

Although the chapters told from Branson’s point of view are riveting, the novel is at its best when told from his mother’s vantage point. Tara’s ordeal and heartbreak loom large as she worries about finding adequate help in tiny Casper, Wyoming, or frets about whether he has taken his medication. The implications of the situation go beyond what is overtly explained. How can she possibly summon the courage to reckon with the fact that her son is potentially capable of extreme violence?

Author M. Billiter, the alter ego of romance novelist Mary Billiter, opens the book with an open-hearted passage about her experiences as the mother of a son with mental illness (including photographs of the family). With the real-life inspiration for this work of fiction planted so deep from the get-go, it’s difficult to ever be truly immersed in the novel without constantly wondering which portions were informed by true events. Nevertheless, the emotional resonance of the story is ultimately overpowering and satisfying.