The Bottom Line: A lush gaslamp thriller that seems destined for a second life on television. 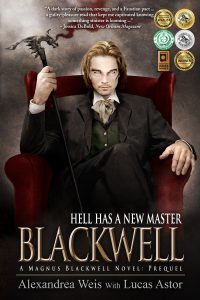 Blackwell is the story of a rivalry that descends into a battle for the ages. In 1886, wealthy Harvard student Magnus Blackwell befriends fellow freshman Jacob O’ Connor. Unlike Magnus, whose family is as close to royalty as they came in New England, Jacob hails from working class stock. Their unlikely friendship is short-lived, as the two become hopelessly at odds over the love of fellow student Frances McGee.

This prequel to the Magnus Blackwell series by Alexandrea Weis with Lucas Astor, authors of Death by the River, is a lush gaslamp thriller. The cinematic novel is filled with Victorian style, breathtaking period-specific architecture and a license for alternate history, such as the inclusion of Oscar Wilde. After befriending Magnus in New Orleans, Oscar declares him a man so obsessed with his greatness that he thinks he is above sin, citing him as the primary inspiration for his character Dorian Gray.

As love triangles go, Blackwell is enticing enough from the get-go, but the novel becomes a bonafide gothic page-turner the moment Oscar introduces lovesick Magnus to a voodoo priestess named Madam Simone. The blend of African, French, Spanish and Caribbean cultures on display feels palpable and timeless. The ensuing story belongs to Magnus and Jacob, but Weis and Astor have given Oscar far more than a cameo role. In fitting fashion for a literary icon, he’s got many of the book’s best lines (“God doesn’t save men. Men must save themselves. God merely shows them the way.”) Long-suffering Sussana Clark fans waiting for a sequel to Jonathan Strange and Mr. Norrell will relish Blackwell, which also serves as a perfect entry point for newcomers to the series.