Mystery and thriller titles currently dominate eBook and audiobook sales charts. So marketing these books must be easy, right? Not so fast. There have never been more ways to sell, promote and cross-promote books – which makes it harder than ever to decide which path is right.

To find out, we reached out to hundreds of authors, publishers and publicists involved in creating and promoting mystery and thriller books (for the sake of simplicity, we’ll refer to all three groups as “publishers” throughout the survey). There are quite a few surprises in our BestThrillers.com Book Marketing Survey. Here’s what we found.

One of the most crucial but fundamental marketing decisions is the format publishers decide to go to market with. According to the Association of American Publishers, audiobook sales jumped by 37.1% in 2018, growing an additional $127.1 million since 2017. According to the Pew Research Center, approximately 18% of Americans are now reading audiobooks.  As Publishers Weekly recently reported, “The audience for audiobooks remains young, with 54% of audiobook listeners under the age of 45.”

A full 100% of publishers surveyed reported creating an eBook format, while 94% also create a softcover print format. Ease of creation and distribution are primary factors. In addition, there is some evidence that publishers have a competitive advantage in regards to price when it comes to eBook sales. 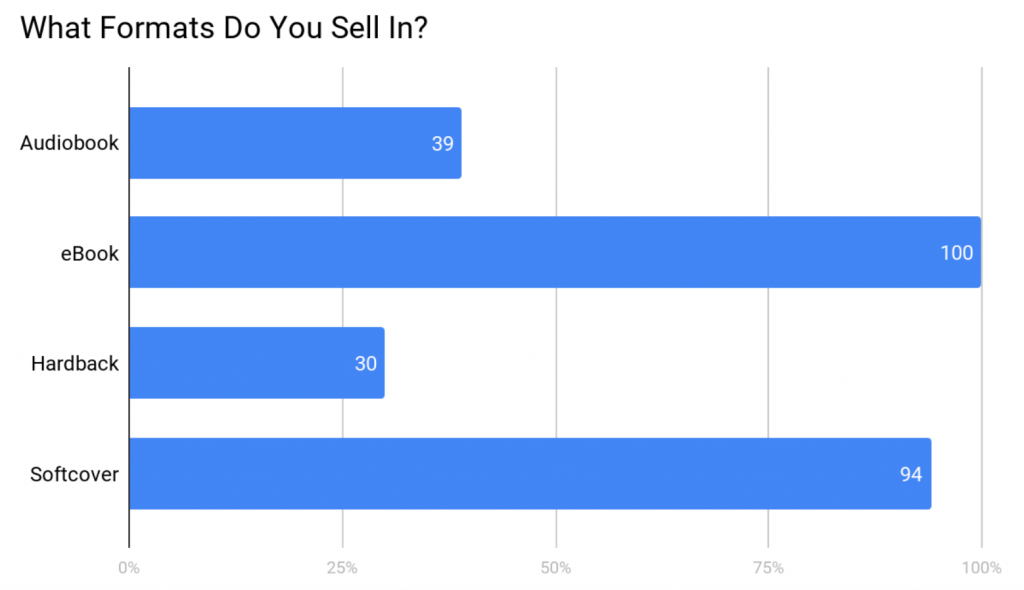 AudioBook Publishing is on the Rise, but Publishers Aren’t Happy With Their Options 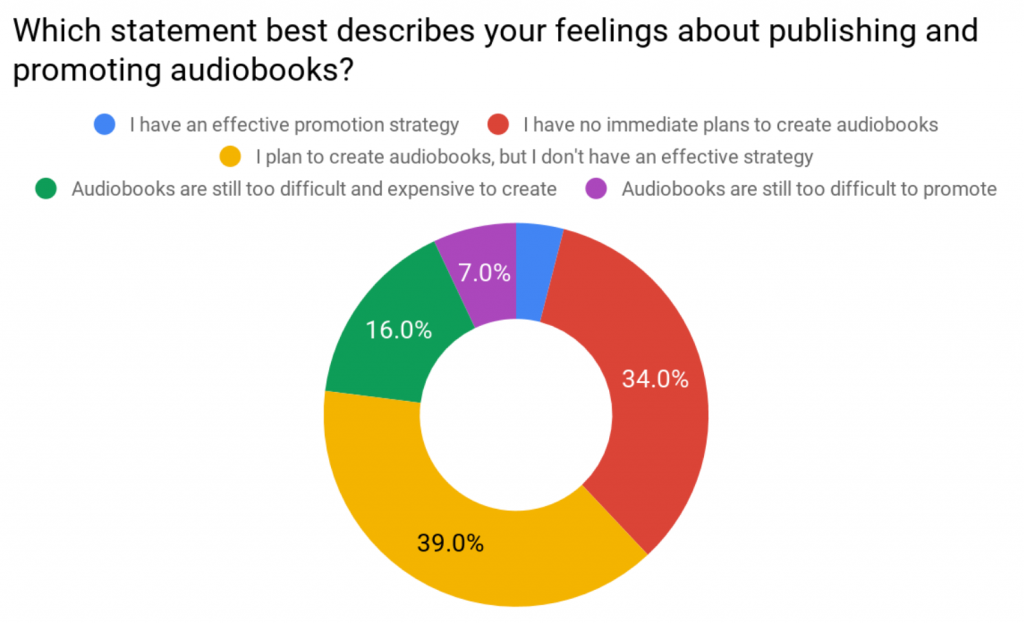 Publishers Sell Across Many Platforms, But Amazon Reigns

Publishers sold across many platforms, with Amazon the sole universal online marketplace. All publishers reported selling on Amazon, with Barnes & Noble in second place at 52%. Perhaps surprisingly, Canadian company Rakuten Kobo Inc. was third with 46%, ahead of Apple, which was fourth at 44%. The findings may reveal opportunities for independent publishers looking to compete for readers on platforms that are less crowded than Amazon.

Among audiobook sales platforms, Rakuten’s Overdrive came in at 24% compared to Audible at 39%. 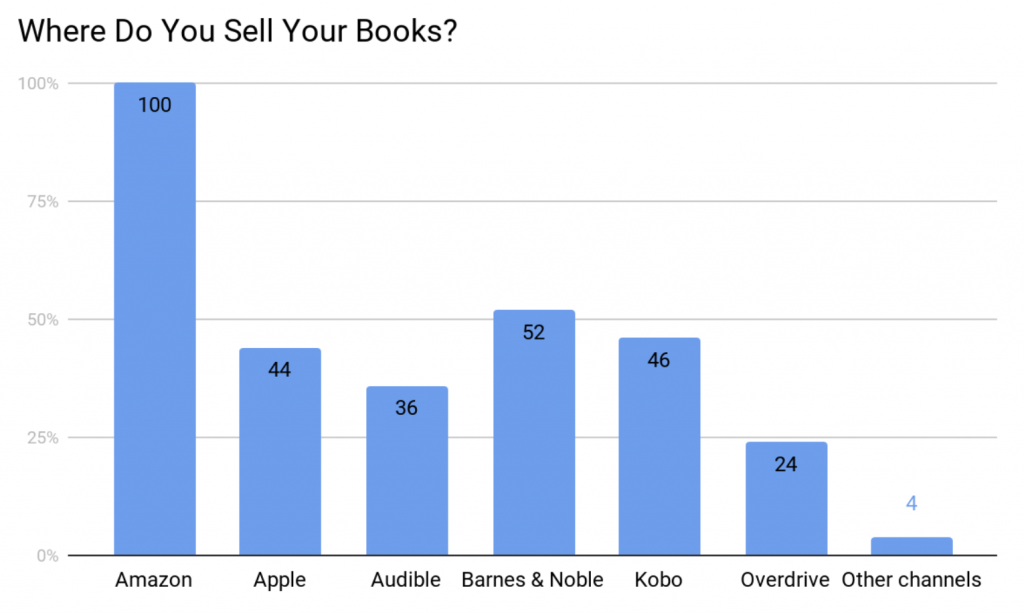 Book Reviews Are the #1 Most Important Marketing Tool, Followed by Giveaways and Discount Campaigns

Publishers were asked to rate the effectiveness of top marketing tools and tactics on a scale of zero to five, with five being the most effective. Among marketing tools and tactics, book reviews were the most highly rated choice at 4.431 out of five. This is no surprise, as countless studies of consumers all industries consistently show that in terms of influencing sales, online reviews are as statistically powerful as recommendations from friends and families.

Among marketing tactics, book reviews were followed by giveaways and discounts, email marketing and social media. Among the major tactics polled, book awards were the lowest rated at just 2.727. 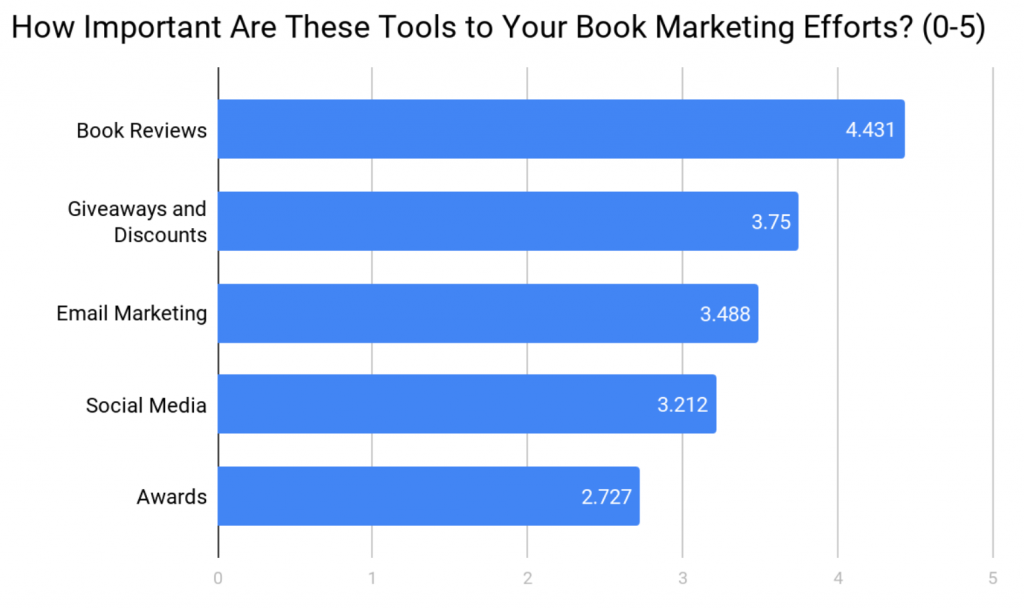 Authors Are Building Their Own Reader Email Databases

Just 16% used both their own list and 3rd party email marketing services. Nearly ⅓ reported that they do not use email as a book marketing tool. 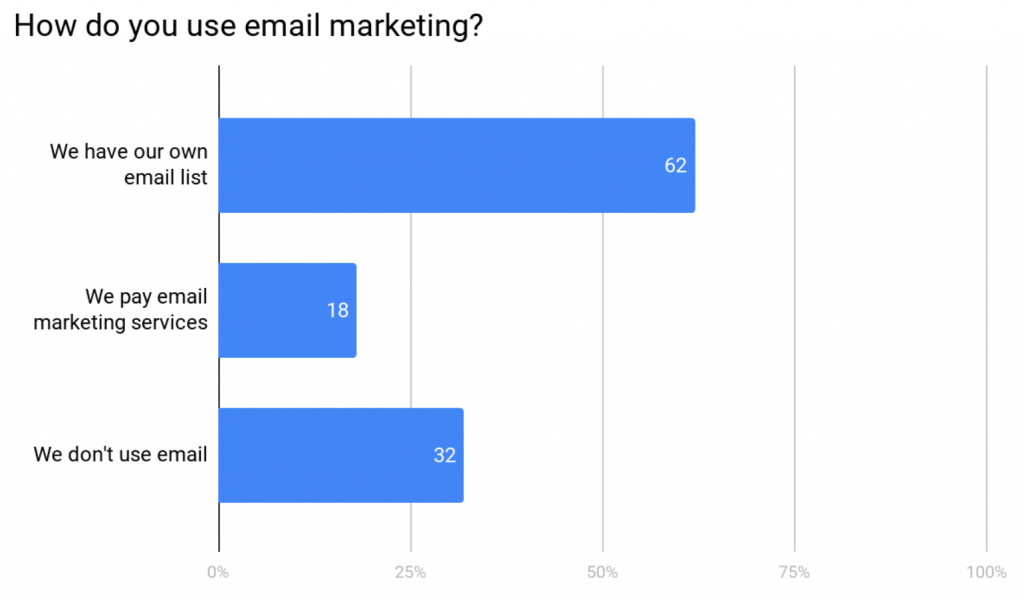 Publishers Use a Variety of Book Marketing Services

Ninety two percent of publishers surveyed had tried at least one of the major advertising services listed in the survey, while 62% had used at least four of the listed services, including ad platforms, review sites like Kirkus Reviews and BestThrillers.com, and email marketing services like BookBub.

Might these numbers be different for other industries? Absolutely. It should be noted that this survey should in no way be indicative of market share. Other genres undoubtedly use other services. 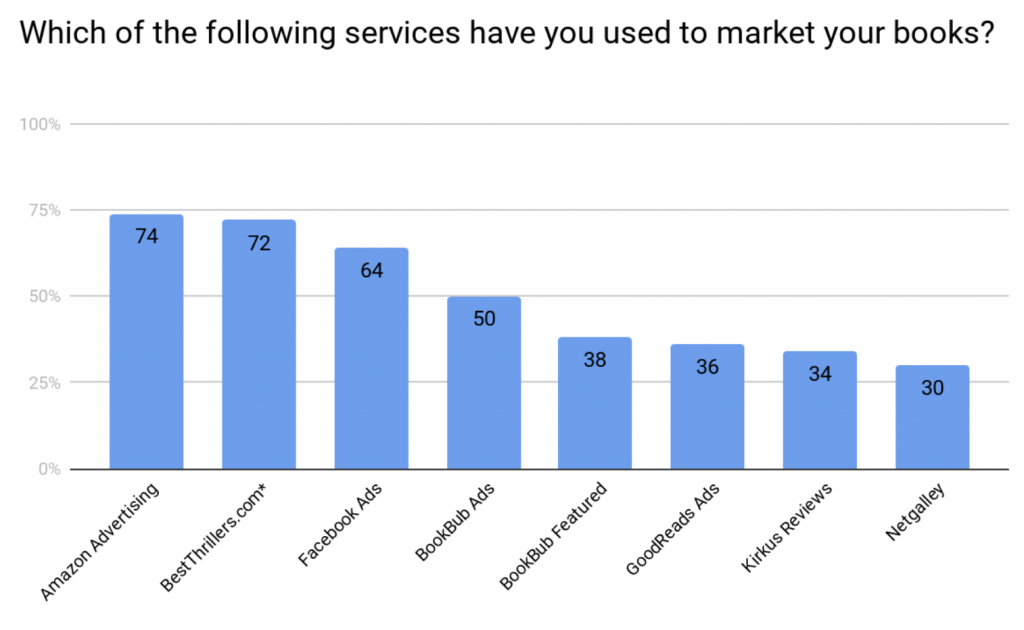 We asked publishers to describe their marketing effort, and the results were illuminating. Some 74% put significant effort into book marketing, with 30% describing the process as beginning pre-release and continuing post-release. More interestingly, 44% reported that they “never stop marketing,” promoting both new releases and back catalog releases. 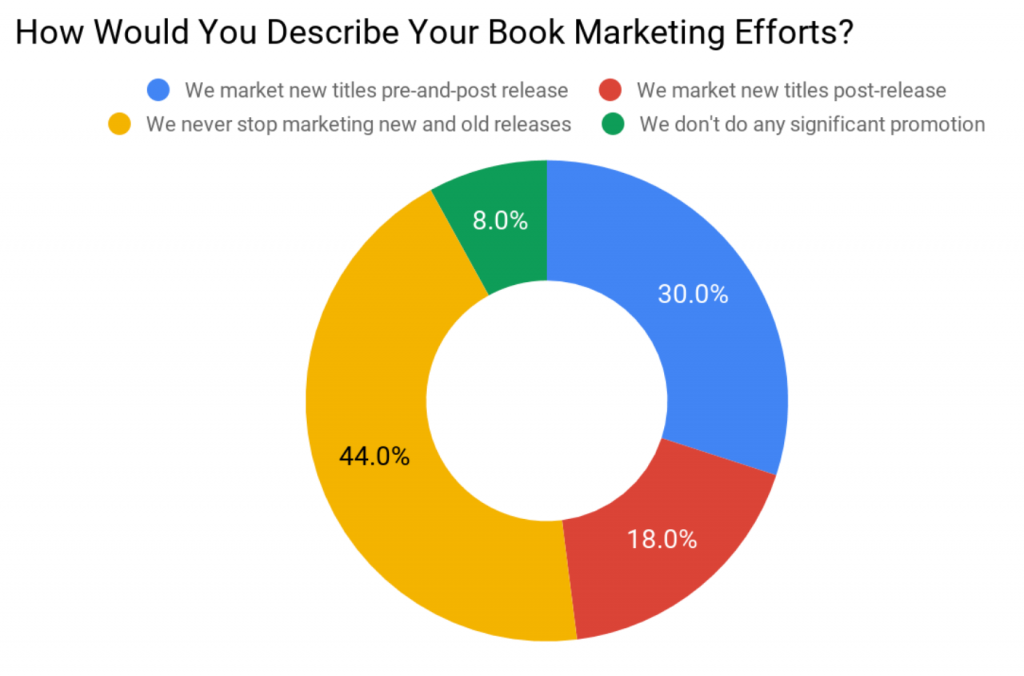 Surprise: Facebook is The Most Effective Social Media Platform for Book Marketing

Because Goodreads is the only major social media platform devoted to readers, it is owned by Amazon and ranks in the top 400 of all websites globally, we naturally expected it to be rated the top choice for publishers. Surprise! It wasn’t even close. Just 40% of publishers reported that Goodreads was “effective” for book promotion.

Instead, Facebook was preferred among publishers by a wide margin, with 74% describing the platform as “effective.” Twitter was close behind, with Instagram a distant fourth. Zero publishers described Snapchat as effective. 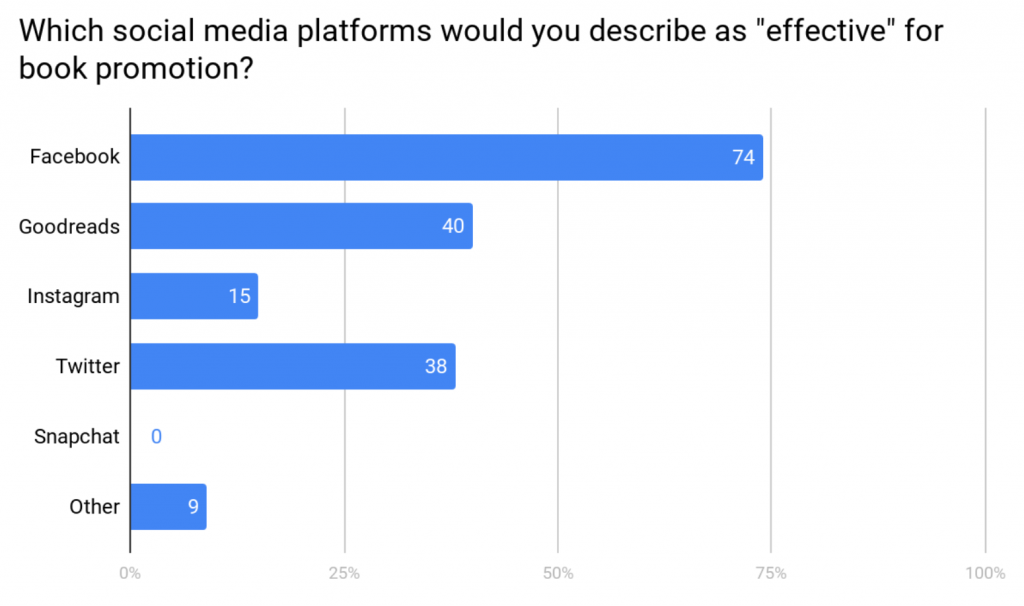 Authors Do Most of the Promotional Work

When it comes to taking primary responsibility for book promotion, the vast majority reported that authors shoulder the heavy lifting. While we work with a number of publicists and publishers at BestThrillers.com, this finding is not a surprise. Regardless of whether authors are independent or work with a large publisher, they are heavily involved.

About one quarter of respondents reported that book promotion is “a team effort,” with 10% reporting that a publicist or agency does most of the work. 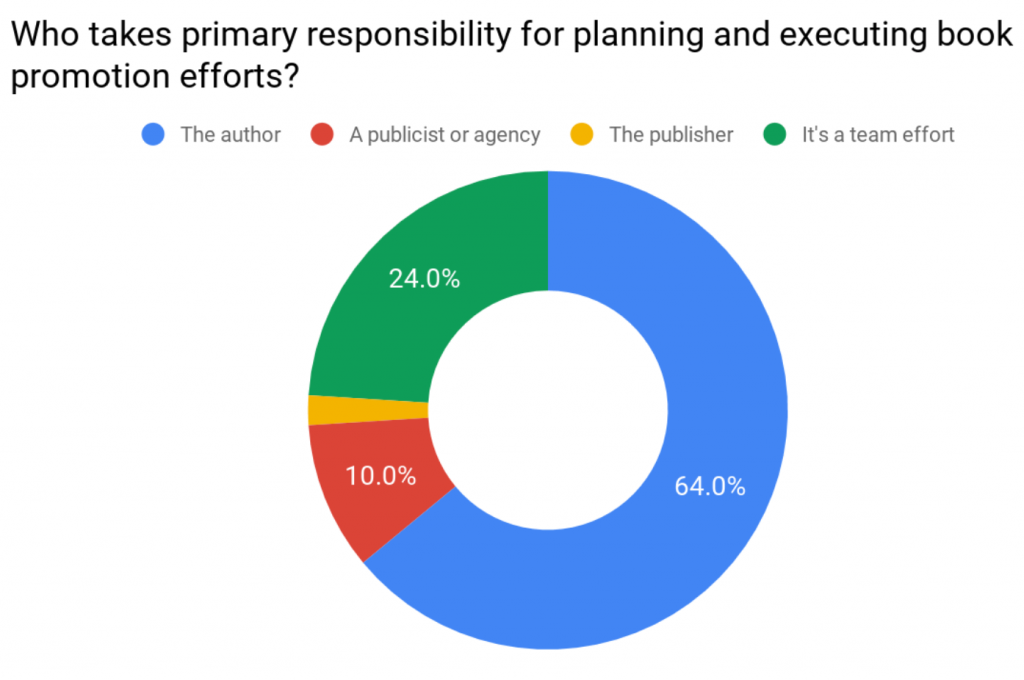