The Bottom Line: DON’T GO is a captivating assassination thriller featuring a sympathetic heroine that you can’t help but root for. 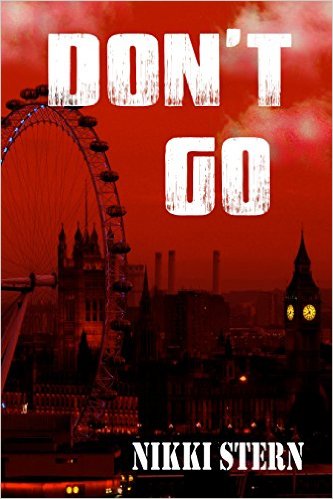 On the surface, Suzanne Addison appears to live the charmed life of the one percent. Her Belgian-born husband, Bill, seems to have walked out of an Ian Fleming novel, complete with diamond cufflinks and the physique of a male model. The Addisons divide their time between London and an old stone farmhouse outside the Welsh village of Rhossili, and while the 50-something Suzanne can still fit into the same jeans she wore in high school, the frequent philanthropic events they attend require that she dress for society.

Just beneath that near-perfect facade, few would suspect the suffering and sacrifice that the Addison’s professions have wrought. Suzanne is an ex-assassin, while Bill works for MI6. Book Two in Nikki Stern’s trilogy of novellas comes as the family is, at last, breathing a sigh of relief after the apparent death of their archenemy, Victor Gault.

But as you might have guessed, the Addison’s foray into normal family life is to be short lived. A shocking revelation – told in taut, tense chapters that alternate between Suzanne’s point of view and that of her enemy – is about to change their lives forever.

What sets DON’T GO apart from other suspense thrillers is undoubtedly the richness and complexity of Suzanne’s character. She makes no apologies for her love of shooting, while eloquently explaining that she aligns with Britain on the issue of gun control. Although her son is marrying the daughter of a Lord, she worries over whether they should chip in for the cost of the engagement party. And through all the details of her family and professional life, the very human cost of the path she has chosen in life is never far from her mind. In short, Stern has created a sympathetic heroine who richly deserves a better life, but finds it just out of reach.

We highly recommend starting with the first book in the series, DON’T MOVE, before digging into DON’T GO.

Book Review: Death by Romance, a Mystery by Anne Kennison
Book Review: The Apothecary, a Nano-Technology Thriller by Marshall Chamberlain