The Bottom Line: A blend of non-fiction and fiction that works on many levels. 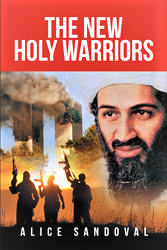 Alice Sandoval’s The New Holy Warriors adds a potent new layer to the canon of post-9/11 political thriller literature. The primary story begins on September 13, 2001, as Dr. Rodrigo Bravo and his wife Sally, both Doctors Without Borders volunteers vanish in Mexico City. Fortunately, the Bravos have two highly educated sons – one a Beverly Hills attorney and another working on a doctorate – who also happens to be trained in counterintelligence and guerrilla warfare. The two brothers recruit a fellow California National Guard veteran and the three head to Mexico to find them.

They soon discover that the Bravos have been kidnapped by a terrorist leader who is a close friend of Osama Bin Laden. Based in Mexico, the Sheikh suffered gunshot wounds at the hands of a Mexican drug cartel and is in need of Dr. Bravo’s expertise in reconstructive surgery. Sandoval successfully weaves a compelling narrative that puts Al-Qaeda in Mexico during its heyday and the Bravos are incredibly sympathetic characters.

The book begins with 2,000 words and images focusing on historical Christian persecution at the hands of Muslims (plus a section from Dante’s Inferno). Throughout, Sandoval commingles real-world imagery with fictional prose, which may be distracting to some readers.

In terms of dramatic action, the book delivers a wild ride with some compelling moments, including an attempted escape sequence that quickly becomes a page-turner. Readers who can focus on the highly entertaining plotline will get the most out of the novel, especially fans of Christian thrillers.

Don’t Fear, My Darling is Impossible to Put Down
The Disappeared, an Evocative Thriller by Sibel Hodge