The Bottom Line: Matthew V Brockmeyer’s debut is country noir at its finest. In Brockmeyer, Stephen King fans may have finally found a new favorite author in this haunting novel. 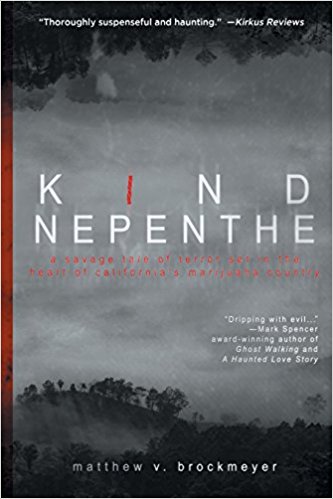 It’s often said that there are two Americas, but Matthew V Brockmeyer’s Kind Nepenthe reveals an unsettling third. Set among the burgeoning new backwoods economy of legalized marijuana, the novel is set in a former hippie commune with an irresistible allure for those wishing to live off the grid.

When Rebecca Hawthorne moved to the remote compound run by a pot dealer named Coyote, she had dreams of teaching Meagan, her five-year-old daughter, how to live off the land (the compound has no electricity, no cell towers and no Internet). But instead of sunny organic living, she finds a forbidding presence in Humboldt County that defies easy explanation. Perhaps Coyote, when explaining the name of a local hill, sums it up best: “They call every hill around here Homicide Hill, and every mountain Murder Mountain. It’s the Wild West, baby. Something or other’s gone down on every piece of land out here.”

Brockmeyer’s no-frills narrative builds the book’s tension beautifully with each succeeding chapter as the lore of a drowned boy said to haunt the forest, and the menacing presence of her neighbors, gradually close in on Rebecca. When it comes to describing the complex psychology of children confronted with the paranormal, few writers rival Stephen King. Count Brockmeyer among them. It’s clear from the start that Meagan and Rebecca are in mortal danger, but with Brockmeyer’s deft touch, the final chapters still manage to surprise.

Beyond what is an excellent horror debut, Brockmeyer brilliantly captures a socio-economic segment of rural American that feels completely authentic. If you liked Winter’s Bone or The Shining, you’ll love Kind Nepenthe.