The Bottom Line: A deftly-plotted, highly entertaining island murder mystery that is sure to broaden author Ronald S. Barak’s burgeoning fan base.

Eloise Brooks, the wife of retired Superior Court Judge Cyrus Brooks, surprises her husband with an island adventure to celebra 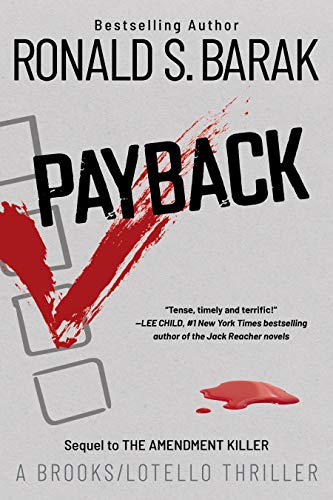 te their 55th anniversary. Her intentions, however, are far from romantic. In Cyrus Brooks’ quest for justice, he often finds himself in life-threatening situations, a trend fueled in part by his close friendship with homicide detective Frank Lotello. In an effort to keep her husband out of trouble, Eloise plans the trip to the fictional island of Punta Maya, the site of an annual thriller publishing conference, where she hopes her husband will be convinced to exchange his real-life murder mysteries for writing about imaginary ones.

Her first mistake is allowing Lotello and his wife to vacation with them, as everyone knows that vacationing detectives are nothing if not murder magnets. Indeed, the curious detectives soon discover that three prominent conference leaders — a well-known literary agent, a coveted publishing executive and a highly successful publicist — have all gone missing, one after another. Before long, both Brooks and Lotello are knee-deep in a murder investigation that threatens their own lives as well. Who is killing whom – and why?

At a conference where most of the attendees spend their entire lives trying to imagine the perfect murder, how do you find a real killer among them? Tensions run high as real-life crime-solvers Brooks and Lotello race to find the elusive sociopath before it’s too late.

Author Ronald Barak’s third entry in the Brooks/Lotello series is easily his most lighthearted, and one that will surely broaden his fan base. In an homage to numerous Agatha Christie mysteries, in which detective Hercule Poirot attempts to take a vacation only to become ensnared in an investigation (Death on the Nile, Evil Under the Sun, And Then There Were None, and others), the contemporary investigators find themselves not only in a similar situation, but even referencing Poirot and wondering aloud how he would approach their dilemma. In addition, the chemistry between the two couples is inherently comic, making for some genuine chuckle-worthy moments.

While Barak injects plenty of levity, Payback is a page-turner in which the author breaks new ground in the political and legal thriller genre. Although the book features no courtroom drama per se, in keeping with the point of view running through Barak’s body of work to date, the narrative contains plenty of adjacent political and legal issues. At a conference where attendees are in mortal danger, Brooks confers with the organizers on their legal – and moral – obligations and liability, riffing impressively on a host of contemporary ripped-from-the-headlines examples of our society’s moral decay that every reader will recognize and appreciate.