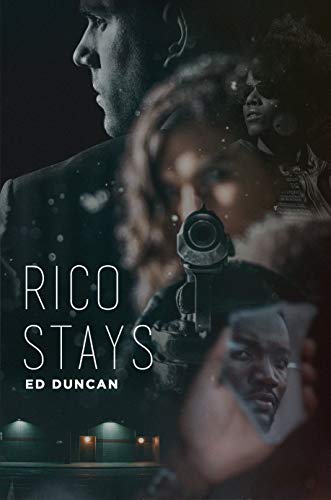 Life has never been easy for Chicago enforcer Rico Sanders, and it doesn’t get any easier in Ed Duncan’s third series book. Rico’s girlfriend Jean happens upon a fight in a supermarket parking lot and calls the victor a bastard. Just as Jean is about to take a vicious beating, Rico intervenes, only to get caught up in a gunfight that leaves three dead.

With gunshot wounds from a .45 that shattered a rib and caused internal bleeding, Rico fears local mobsters may come for him. Jean goes to attorney Paul Elliott, who series fans will remember from previous books, to help hide Rico. It’s an awkward conversation, since Paul doesn’t know Rico’s name, but with Jean’s help, does remember their complicated history together. Paul credits Rico with saving his life twice. But his girlfriend – whom he’s cheating on – won’t see it that way.

While Duncan’s stellar first two series novels are driven by specific cases, Rico Stays is about the consequences of being Rico Sanders. Trouble comes with the territory in his line of work, and he can’t even enjoy a simple baseball game or trip to the grocery store without getting blood on his hands. In Rico’s world, forgiveness is hard to come by, and revenge is almost always lethal.

The book’s best moments come in a secluded cabin, where Rico, a man of few words who is utterly out of his element in the country, begins reminiscing about time spent camping with his father. He then opens up with a shocking revelation about his family that sets the stage for the book’s unforgettable, action-packed final chapters.