The Bottom Line: A complex medical thriller that hits like a bombshell. Prepare to be up long past your bedtime. 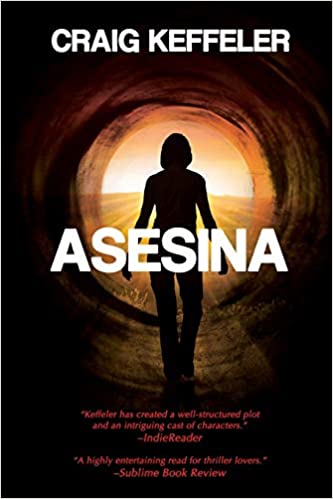 Esteemed neurosurgeon Dr. Ernie Girard seems to have it all. With a profile studded with prestigious institutions like Yale, UCLA and the Mayo Clinic, his neurological institute is about to be snapped up by a German conglomerate, which could net him more than $60 million.

Behind the scenes, things aren’t pretty. Girard runs his practice “like a Russian tractor factory.” He’s got a bad drug habit. And he’s using his power as chairman of California’s Investigative Review Committee to fend off medical fraud cases.

For reasons too complicated to go into, one of Girard’s fellow committee members, connected physical therapist Harold Chase, has a bounty on his head. His would-be killer is an assassin named Angel. In one of the most thrilling sequences in the entire book, the novel opens with the detailed, methodical assassination of a judge in Juarez, Mexico, who was poised to become the Governor of Chihuahua.

Author Craig Keffeler devotes ample time to humanizing Angel – the word “asesina” translates from Spanish as murderess, or female assassin – through her relationship with her mother and cats. But the book’s most lethal killer turns out to be a deeply flawed healthcare system. Juggling a large cast of characters, Keffeler weaves a complex network of attorneys, gangsters, medical practitioners and white collar criminals seeking to either bring Girard down or get a piece of his action. Keffeler, a former hospital executive, injects every single conversation with urgency, fear and unease.

The book’s ample references to the healthcare policies of presidents Obama and Trump are educational, but offset by the many references to something called GavinAid, a fictional single-payer healthcare system put in place by real-life California governor Gavin Newsom. Readers may find themselves fact-checking throughout to distinguish fiction from reality.