The Bottom Line: A thoroughly compulsive police procedural by one of America’s most promising new writers. 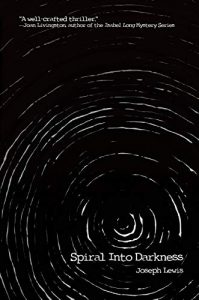 Joseph Lewis, author of our Best of 2018 pick Caught in a Web, is back with another crime thriller featuring world-weary Milwaukee detective Jamie Graff. This time, Jamie’s expertise is requested by Summer Storm, the leader of the FBI serial killer task force. There are seven loosely connected murders, no leads, and just one unifying factor – he shoots his victims in the face, no more than twice. He uses an old-fashioned .38 caliber handgun. The FBI profiler believes they’re looking for a male between the ages of 30 and 50, who is a single, well-educated professional.

With next to nothing else to go on, Graff is left to look over his cold cases and see if anything pops. What follows is a simmering police procedural that effectively builds tension with each succeeding chapter. Surprisingly, the novel’s most intense, white-knuckled moments come during the interplay between a 15-year-old teenager, Bobby, his adopted brother, Brian, and their group of siblings, friends and lovers.  Their ultimate relationship to the murders is both earned and shocking.

When it comes to developing Jamie’s character, Lewis is all business. The novel opens as Jamie is rewarded with an offer of promotion to Chief of Detectives. He sees it as a no-win situation. While the idea of extra money is appealing, the idea of spending any time behind a desk doing paperwork seems like torture. The alternative is taking orders from one of several lackluster colleagues. He relents on the assurances that he’ll still be working in the field, and moves on with little fanfare. While Lewis savagely explores romance, drama, and sexuality with his wider cast of characters, Jamie’s interpersonal life is refreshingly free of drama for a cop, enabling him to be the determined, resourceful rock capable of cracking the case. The result is a thoroughly compulsive crime thriller.

Verses for the Dead, a New Classic by Preston & Child
Watching You, a Brilliant Psychological Thriller by Lisa Jewell