The Bottom Line: A small town police procedural with a big heart and a shocking finale. 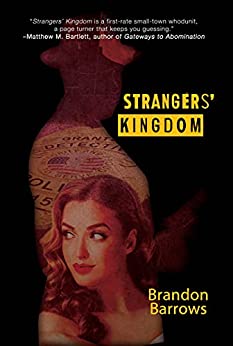 Set in the early 1990s, Strangers’ Kingdom tells the story of police detective Luke Campbell’s quest for a fresh start. The former Albany cop had the city’s second-highest closure rate in the major crimes division before he shot a politician’s son in self-defense, leading to a career-threatening internal affairs investigation. Those events lead him to a small town in Vermont, where he interviews for an open detective position.

The new job pays just $400 per week, but that doesn’t deter him. His boss, Police Chief Skillman, tells him that he’ll mostly be dealing with bar-brawls, domestic situations, DUIs and petty crimes. But it isn’t long before Luke is called to investigate the discovery of a body that looks as if it’s been in the woods for over a year. As Luke will soon discover, that’s just the first gruesome crime he’ll be called to.

Author Brandon Barrows builds Granton, Vermont with all the right details for a convincing small town mystery. Among them is the habit locals have of calling Chief Stillman’s home rather than the police station, and the way the editor of the local newspaper approaches Luke for a quote far before he should have any knowledge of the crime. Those details are important, because Luke isn’t a former big city cop – he’s actually a small city cop who moved to a tiny town. Nevertheless, his culture shock is convincing throughout, as is his burgeoning romance with a waitress named Chloe. Through convincing backstory and his humble attitude, Barrows earns readers’ sympathy for Luke early and builds upon it until the books’ shocking finale.