The Bottom Line: One of the year’s best romantic suspense thrillers. 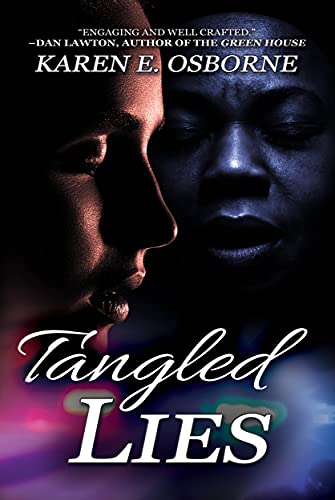 Vera Moon lives in a dilapidated apartment building with her grown son Charlie, squeaking by on her social security payments and what little Charlie brings in. Her hardscrabble existence is turned on its head when she comes home and discovers their dog, Brandy, slashed, chained and left to die. Then she finds Charlie’s decapitated head on a blood-soaked mattress.

Tangled Lies traces Vera’s quest to solve her son’s grizzly murder. Within three months, she and daughter Liza are the victims of a hit-and-run car accident that leaves Liza with a severed liver. Soon after, a woman claiming to be Charlie’s ex-lover tells Vera that the wreck was no accident. She also asks several suspicious questions. Next, circumstances lead Vera to meet a woman named Dani, who witnessed the accident, and may be helpful in helping solve Charlie’s murder.

Author Karen E. Osborne’s explosive first chapter is succeeded by a constant series of surprises and a world where danger lurks around every corner. Osborne’s narrative comes in cinematic bursts that inject vivid imagery and high-impact dialogue, but also leave plenty to the imagination. Matters of racial identity are highly pervasive in the minds of the characters, but Osborne’s plot justifies racial focus as the book unfolds. In addition, Osborne includes intense romantic and sexual relationships that burn just as hot as the book’s violence. Osborne delivers graphic sexual imagery that adds fireworks without ever distracting from this masterfully constructed whodunnit.