The Bottom Line:  A timely edge-of-your-seat terrorism thriller that plays on every parent’s worst fears. This cinematic novel is destined for TV. 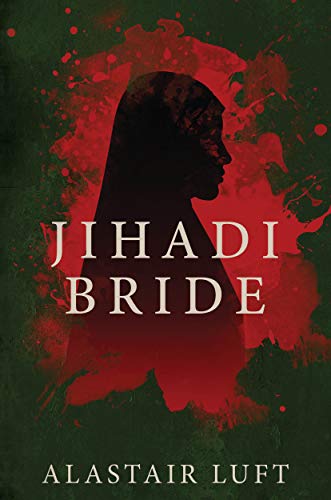 Alastair Luft’s provocative thriller begins as ex-soldier Erik Peterson receives a call from his daughter, Arielle, who explains that she’s no longer at the University of Montreal. She explains to her father that she converted to Islam six months earlier. Furthermore, she’s in Germany. She and her friend, Naomi, are on their way to Syria to join the Islamic Caliphate.

The idea of a child joining the enemy would rank near the top of any parent’s worst fears, but it’s even worse for Erik, a man who devotes his life to preventing radicalized individuals from joining extremist groups. A widower who has seen his fair share of personal trauma, Erik embarks on an all-or-nothing quest to bring his daughter home. Luft’s narrative takes us to far-flung locales including Iraq, Turkey and Syria, alternating between the point of view of father and daughter.

The publication of Jihadi Bride arrives not long after the release of the Western world’s most infamous Islamic recruits, John Walker Lindh, aka the American Taliban. Erik’s search for answers seems entirely believable, and his character is well-drawn. While Erik is an expert in radicalization, his emotional ties get in the way of reason (“She was too smart to self-radicalize”). Fans of Liam Neeson’s Taken film series will love the story, but the knowledge that Arielle has brought this on herself brings far more emotional heft and urgency to the material.

Both father and daughter journeys are equally harrowing, but the novel’s best moments belong to Arielle as she and Naomi are faced with impossible, suffocating choices at every stage. Luft nails it from start-to-finish, creating a cinematic story that is deserving of a TV series.

Bionic Bug, One of the Year’s Best Thrillers
Back Bay Murders, a Searing New Crime Thriller by Andrew Bonar