The Bottom Line: A stunning spy thriller about the explosive combination of technology, ambition and fear. 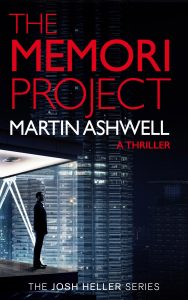 Purportedly bored with his life as a playboy billionaire, Simon Scott has put in motion a plan that will position him as the world’s foremost scientific philanthropist. Citing a lack of progress in the field of neuroscience in comparison to other fields, Scott promises something astonishing: the ability to record, map and parse a person’s thoughts. Fittingly, it’s called The Memori Project.

Understanding that the project will be controversial, Scott hires documentarian Josh Heller to create a film about it. He embeds Heller within the project team and attempts to create the illusion of access. But unbeknownst to Scott, Heller is a CIA operative whose career is a nonofficial cover. Heller agrees to unearth the truth about Scott’s work, and soon discovers a trove of dirty laundry, including Scott’s son and mistress, both of whom died under mysterious circumstances.

At a time when technology has enabled humanity to process and analyze vast amounts of data, Author Martin Ashwell’s debut novel explores something truly novel – what a powerful organization would do if it could read minds. In Simon Scott, Ashwell has created a sort of evil Elon Musk whose presence renders the book truly addictive, and whose real motivation will truly shock and surprise readers.

In contrast, Heller’s skeletal personal life includes an ex-wife and a former co-worker-turned lover. Although he’s an observer by nature, he’s also the sort of person who can’t help but put the people he cares about in harm’s way. The result is a stunning novel that deftly explores what happens when technology, ambition and fear collide. Highly recommended.

The Killer Collective, a New Spy Thriller by Barry Eisler
Verses for the Dead, a New Classic by Preston & Child