The Bottom Line: The Secret Brokers is a fresh, fast-paced espionage thriller with a generous dose of romantic suspense. 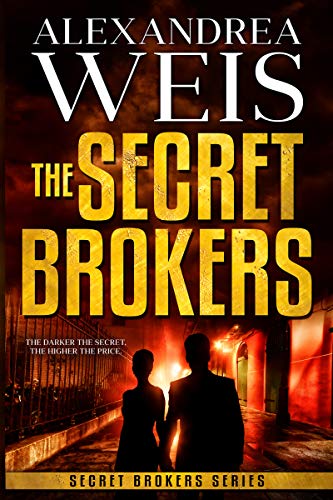 Alexandrea Weis’ first Secret Brokers series novel proves that spies are a lot more fun when they don’t work for the government. Former FBI agent Dallas August runs a private firm that offers elite spies for hire. Unlike the FBI, they have no limits.

Headquartered in New York, Dallas is taken aback when mob boss Carl Bordonaro asks him to handle a case personally. It seems that Carl is almost like a godfather to Gwen Marsh, a young divorcee with a target on her back. To make matters worse, she’s also under scrutiny from Dallas’ old employer, the FBI. Dallas has to protect her while also finding out what she knows about the death of a mafia kingpin.

Both tasks will be easier said than done. In terms of protection, Gwen’s 15-acre ranch is full of security risks, including ditches, high points and vast stretches of woods where assassins or intruders could easily hide. More concerning is Gwen’s reputation for distrust. A close confidant advises Dallas that just one strategy will work: seduction.

The case takes Dallas down to Gwen’s Louisiana home, which is where author Alexandrea Weis’ uncanny feel for the local culture, landscape and even architecture comes to life. Weis’ descriptions of Gwen’s Acadian cottage and surrounding farmland are nothing short of intoxicating. Gwen’s snoring cat, Lawrence, and good-natured Mastiff, Harley, lighten the tone. At the same time, danger seemingly lurks behind every blade of grass. As spies go, Dallas isn’t concerned with introducing a lot of advanced technology to help protect his target. He’s old school, preferring a Sig Sauer P226, a dog and his instincts.

Most intriguing is the timeless friction between Gwen and Dallas. He finds her “devastatingly” attractive, but her attitude is nearly unbearable. Once their enemies start closing in, the sexual tension – not to mention what will happen to him if he screws this case up – turns The Secret Brokers into a high-stakes page-turner.