The Bottom Line: Terrorism, greed, genetics and politics collide in this complex and gripping thriller. 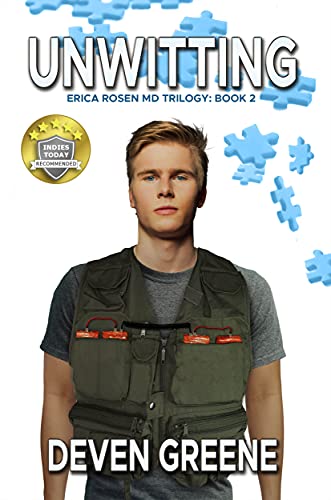 In her previous Dr. Erica Rosen MD series book Unnatural, the pediatrician stumbled upon a program to develop Olympic athletes by manipulating the genes in embryonic stem cells. While that storyline reverberates in Unwitting, Erica’s focus soon becomes the investigation of a suicide bombing at San Francisco’s Oracle Park baseball stadium. Already obsessed by the news coverage, she then receives a cold call from a former patient named Brandy Monroe. The patient claims she has a possible connection to the bomber, and in fact, an entire suicide bomber training program.

But before she can speak with Monroe in person, the police have already arrived at the day school where the woman is a teacher. Monroe has been murdered, and one of her young autistic students, Zaron, sits nearby, doing a jigsaw puzzle. His classmates are missing.

In this second series book, the brilliance of Deven Greene’s vision for the pediatrician-sleuth has been fully crystallized. Erica’s interactions with Zaron and contributions to the case come not just from a place of empathy, but also medical knowledge. In Greene’s hands, she has a far greater chance of working with Zaron to make headway on the case than her police counterparts. As in all great detective fiction, tension between the sleuth and police is an opportunity for suspense. In this case, it’s heightened in situations like the one where an officer named Porter asserts that Zoran is lying to them. “I have a niece with Down’s syndrome,” he says. “She’s a retard, but at least she’s not sneaky. She’ll tell me anything I want to know. She loves to sit on my lap, no matter what I say to her.” Erica’s perfect retort:  “I can just imagine what you say to her.”

In terms of character development, Greene throws the kitchen sink at Erica. We’re fully immersed in the lives of her and her new husband, co-workers, mother and even her personal health issues. At times, the forays into her personal life threaten to overtake what is an incredibly compelling investigation to find the bombing perpetrators. But once Erica finds herself in danger, the case itself becomes personal, and that makes for very high stakes.