Bottom Line: While grounded in reality, Remote Access is a must-read with a singular sense of escapism rare in a political thriller. 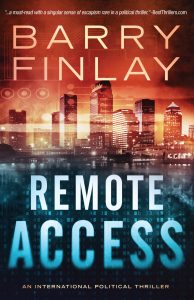 Annie Logan spends another lonely night with too much wine and social media, someone takes control of her computer. If this sounds like just another ransomware attack, think again. Logan, who is married to the president’s chief of staff, is faced with this threat: stop the president from signing an impending executive order, or face far-reaching and deadly consequences.

Remote Access is the perfect entry point for new Barry Finlay fans, as well as those already familiar with his power pair, engaged couple Nathan Harris and Marcie Kane. Together, Harris and Kane discover a sociopath with hacking skills and various poisons who has been hired by the Chinese government to stop the president from signing the executive order. Add in foreign governments and biological weapons, and Finlay has created a book that will appeal to readers on both sides of the aisle.

While it looks like the work that could come from a network of shady characters, our heroes discover that it’s more about cybercrime than established terror syndicates. The engaged couple’s back-and-forth adds a fun addition to the story, and the high-octane pace and high-stakes situations get even deeper with their relationship in the mix. Remote Access is recommended for both general thriller fans as well as anyone fascinated by the dark art of hacking.