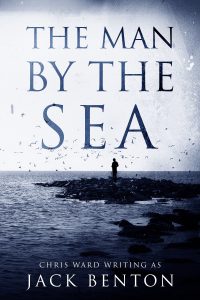 Slim Hardy is a functioning alcoholic who has paid his dues to the military. More recently, he has embarked on a career as a private eye, where he is tasked with figuring out exactly what Ted Douglas is doing in a remote cove every week. What seems like a straightforward marital affair gets turned on its ear when Hardy witnesses what appears to be an exorcism, spirits and other strange phenomena. Being a man of reason, Hardy digs deeper to find out exactly what’s going on. Could Ted really be having an affair with a ghost?

Jack Benton is the pen name for this exciting new series, authored by none other than prolific horror and sci-fi author Chris Ward. Amidst scores of predictable detective novels, The Man by the Sea is anything but formulaic. And yet, Benton has served up a perfectly satisfying tale for pulp fans with a dash of the supernatural.

With its rolling fog to keep secrets away from prying eyes (like strange rituals and performances of Romeo & Juliet), Benton’s setting, Cramer Cove, is mesmerizing. Finally, Benton has packed the novel with a tight cast of characters that aren’t quite who they seem at first glance. With the stage set for even more adventures with Hardy and Co., readers should relish this new must-read series.

It Ends With Her, a Satisfying Serial Killer Thriller by Brianna Labuskes
Remote Access, a Must-Read Political Thriller by Barry Finlay