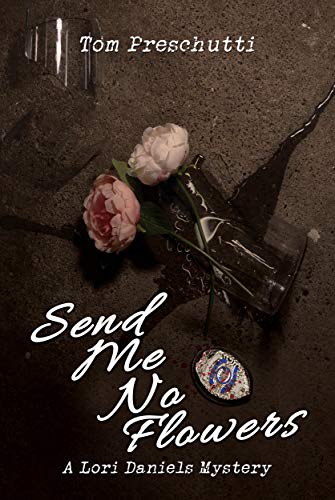 In keeping with the style author Tom Preschutti established with Lover Come Back, the third series book Send Me No Flowers is a seamless continuation of its predecessor. Hardboiled police detective Lori Daniels is once again convinced that someone from her past – in this case, a high-ranking police officer – is affiliated with a local gang and tied to a courthouse combing and several murders.

Told in the present tense, and with a decidedly urgent tone, Send Me No Flowers reads like a climactic outtake within a longer novel. The story is deliberately reliant on prior books for much of its backstory and character development. For that reason, readers should start with Pillow Talk to fully appreciate the context of the action-packed sequences here.

Preschutti’s series has always fully embraced romance. A recurring theme of prior books has been that Daniels gets mixed up with a lot of men who, for all their charms, are actually hardcore criminals. While that theme continues here, Send Me No Flowers is filled with desire, longing and sex among various law enforcement professionals. Lori’s coworker Ellis wants her. Likewise, Lori’s relationship with Agent Dwayne Johnson simmers with sexual tension that does not go unnoticed by colleagues.

And she’s not alone. The book is bursting with sexual and romantic encounters between various characters. While the plot still manages to hold together, character relationships take center stage in this series installment.