The Bottom Line: Daniel Silva fans will find a new favorite with this made-for-Hollywood tale of ancient art, mystery and murder. 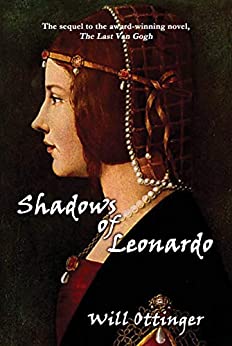 Shadows of Leonardo opens months before the end of World War II, as the Nazi regime is collapsing across the eastern front with Russia. Starving and on the verge of freezing to death, a Nazi SS officer discovers a create bound for Reichsmarschall Göring. When he looks inside, he finds potentially priceless artwork. Knowing Allied troops are closing in, and sensing a way out of certain death, he promptly murders his fellow soldiers and makes off with the goods: “A loyal soldier who did his duty deserved a better fate than an anonymous death in a frozen wilderness.”

Will Ottinger’s narrative jumps 75 years into the future, told from the point of view of Adam Barrow. A self-proclaimed “tracker of lost art,” Barrow is famous within art circles for rescuing a lost van Gogh. He’s given a $40 million dollar budget to bid on a supposed pen-and-ink study by Leonardo da Vinci depicting Christ as a younger man. During the auction, he saves a man named Enzo Riva from security’s clutches when he disrupts the proceedings to proclaim that the work is not Da Vinci. Soon after, Riva reveals an ancient book created by Leonardo Da Vinci’s pupil and companion, drawing Barrow into a journey for the truth that will put himself and those around him in danger.

Ottinger’s narrative switches back and forth between timelines, his crisp, economical prose seeming to transport readers effortlessly from one world to another. While passages told from Barrow’s point of view don’t contain the lush artistic detail found in Daniel Silva’s Gabriel Allon series, Will Ottinger is a master of packing vivid landscapes and complex sensations into succinct paragraphs, and his characters’ dialogue, assertions and utterances are delicately tailored to their respective personas. This incredibly well-crafted thriller is a big-tent crowd pleaser, but will be particularly appreciated by Silva fans who love stories centered around stolen art and ancient mysteries.