The Bottom Line: A mesmerizing medical thriller about the consequences of humanity’s quest for immortality. 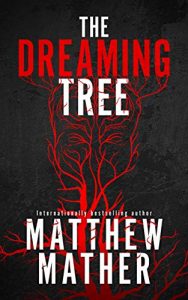 In Matthew Mather’s The Dreaming Tree, Royce Lowell-Vandeweghe wakes up after a nearly fatal car crash to find that his mind has been transferred into a new body. Suffice to say his recover is “complicated,” with side effects that include waking nightmares. Years later, he answers the door at his Long Island home and meets Delta Devlin, a New York detective with extrasensory perception.

Royce becomes Devlin’s prime suspect in a string of grisly murders. Desperate for answers, he tracks down the grieving widow of the man whose body he now inhabits. Out of time, and perhaps his mind, they spiral into a world of black-market body parts and billionaires where nothing can stand in the way of living forever—not even death itself.

Broadly, the store shares themes with Shelly’s Frankenstein. However, Mather’s novel is actually more nuanced, combining the teeth of a crime thriller and the societal implications of Never Let Me Go, Kazuo Ishiguro’s dystopian thriller about an academy of teens raised specifically for organ harvesting.