The Bottom Line: One of the most impressive debut thrillers of the past decade. 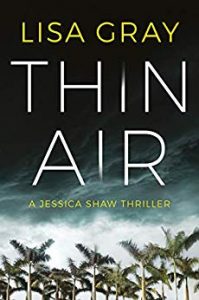 Readers who love LA noir are in for a treat with Lisa Gray’s gripping debut novel, Thin Air.  The driving force in the novel is a photograph sent anonymously to private investigator Jessica Shaw of a three-year-old girl who has been kidnapped. The little girl, it turns out, is her.

Who sent it to her, and why?

The answers lie in the shadows of LA, where her biological mother was killed the night she was abducted, 25 years earlier. The LAPD has forgotten all about the unsolved murder.

Meanwhile, veteran LAPD detective Jason Pryce is in the midst of a gruesome investigation into a murdered college student moonlighting as a prostitute. A chance encounter leads to them crossing paths, but Jessica soon realizes that Pryce is hiding something about her father’s checkered history and her mother’s death.

Gray’s protagonist, Jessica Shaw, battles serious demons that will test readers’ sympathy and loyalty. Does Gray know Los Angeles as well as LA noir specialist James Ellroy? Perhaps not, but for a first novel, Thin Air is amazing. Shifting perspectives keep readers on their toes. Those who stay on board until the final chapter are in for some terrific surprises.

Gray’s new fans can look forward to the second book in the series, which is due out in a few months.

The Art of Dying, a Stunning Crime Thriller by Derik Cavignano
The Ninth Session, One of the Year’s Best Thrillers