The Bottom Line: A truly original approach to the serial killer genre by a promising new writer. 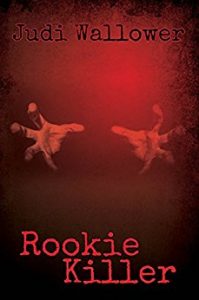 Rookie Killer is nothing less than a terrifying descent into the mind of a serial killer. The novel begins with a global confession from 33-year-old federal inmate Randi Nolan, Ohio’s first female serial killer. First-time novelist Judi Wallower uses Nolan’s best friend and fellow inmate Jax, the product of an unstable foster home, to tell Randi’s story. Together, they team up to write a book about Randi’s life.

Part therapy session, part confessional, the novel alternates between casual inmate conversations and straight-up storytelling with ease. More fascinating than how each murder took place is the motive, which stems, at least originally, from personal loss. Even better is Randi’s analysis of her attempts to evade capture, which inevitably border on narcissism: “I know all killers think they are the smart ones and they won’t be caught by the police…but in my case…it’s true…I will go down in history as the best, the smartest, most unpredictable rookie serial killer with the most uncommon, non-linking crimes unlike any other serial killer ever.”

If Rookie Killer has one Achilles heel, it’s a lack of suspense. With the details of Randi’s crimes told from the confines of a jail cell, Wallower must rely on her characters’ developmental arc to continuously add intrigue. From this perspective, the story works quite well, although she could certainly go farther with it. With such a well-developed character, let’s hope that there are plans for a sequel.

Blind Eye, One of the Year’s Best Crime Thrillers
Blowout, a Blast of Suspense, Romance and Political Thrills by Xingu Fawcett