The Bottom Line: Elloy’s most challenging work yet, This Storm is strictly for fans of LA Noir and James Ellroy completionists. 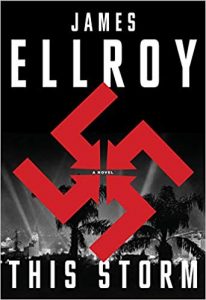 With This Storm, the author of classics like LA Confidential and Black Dahlia has entered yet another novel in the canon of crime thrillers set in the city of angels. As torrential rain hits LA in 1942, a body is unearthed in Griffith Park. The cops rate it a routine dead-man job, but they’re wrong. The murder has everything and nothing to do with the war against the Japanese and the Nazis.

Ellroy is the undisputed king of LA noir, and he’s got the flavor just right, down to the World War II-era atmosphere and jargon of the early 40s. The city itself is a simmering, brooding character.

But the novel is also crowded with characters whose relationships to one another aren’t always readily apparent. Ellroy has produced a gem, but due to the massive cast of characters and Ellroy’s style, which now very partial to short, clipped sentences and shifting points of view, be prepared to work to extract the plot from the art.

Corrupt cop Elmer Jackson is a flesh peddler and a bagman for the L.A. Chief of Police.  Hideo Ashida is a crime-lab whiz, caught up in the maelstrom of the Japanese internment. Dudley Smith is an LAPD hardnose working Army Intelligence. He’s gone rogue and gone all-the-way Fascist. Joan Conville was born rogue. She’s a defrocked Navy lieutenant and a war profiteer to her core.

Up for a meaty, challenging read? By all means dive in, or listen to the beautifully narrated audiobook.

Black Frog, a Small-Town Crime Thriller that Fires on All Cylinders
See No More, One of the Year’s Best Thrillers