The Bottom Line: Inspired by harrowing true events and real-life people, Torched is a must-read. 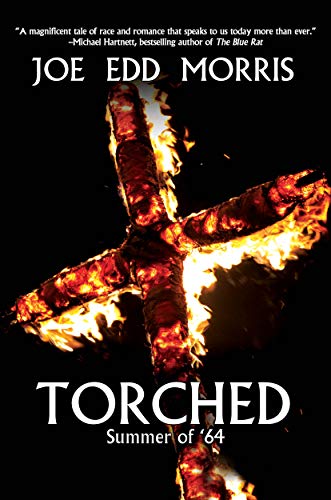 In the summer of 1964, newly minted Methodist preacher Sam Ransom drives from Atlanta to his summer post in rural Mississippi. From the start, he knows they’re going to work him to the bone, as he’s expected to preach five times each Sunday at various area churches as well as visit hospitals and attend funerals. He also knows it’s Klu Klux Klan country.

Sam has arrived at the epicenter of a culture war. The Civil Rights Act of 1964 had just been passed, and black churches have been set afire all over the south, while the murder of black people largely goes unpunished. His intention to stay far away from political or racial issues is immediately tested when he’s approached by both civil rights activists and white supremacists. The official orders from the bishop are to extend brotherly love, but quietly.

His first life-changing event happens when he decides to defy orders by attending a local civil rights meeting at a nearby church. There he recognizes two black friends from his childhood: Early, who used to play with, and Sharon, whom he had a serious crush on. While the reunion is deeply satisfying, he’s also publicly recognized at the meeting. Afterward, a car follows him home. His life will never be the same again.

Told from Sam’s point of view, author and retired Methodist minister Joe Edd Morris has delivered a novel that simmers with uncommon dread even while its determined characters trudge toward enlightenment. Morris delivers a tactile sense of place, as Mississippi’s “continuous matted jungle” serves as both a vivid landscape and an apt metaphor for the area’s seemingly inescapable horrors. The book’s suspense builds with each succeeding chapter, but so too does Sam’s awakening that he’s been called to take direct action. When the consequences of his decisions result in bloodshed, the book transforms into a vivid coming of age story that propels him into the heart of southern darkness. Highly recommended.

The Best Female Detective Books, Ranked (Updated!)
The Guest List, an Satisfying Romp of a Crime Thriller by Lucy Foley